I got my Kinect today and thought I would share my initial thoughts. First off the packaging was actually really nice. It’s funny on how much thought and design goes into something that you really only use for a minute and then throw away. I think a lot of this comes from how Apple packages its products and has become somewhat of an industry benchmark. It definitely sets the stage and makes you feel good about your $150 purchase. 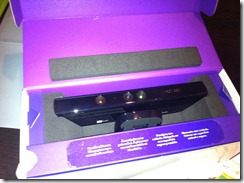 The instructions were clear enough, the biggest things were to keep it centered under your TV, don’t put in front of a speaker and don’t put it too high (over 6 feet). The device connects via USB, and if you have an original Xbox then you’ll need to also use an attached power supply. If you have the newer Xbox S then this is not needed.

Upon first startup you are first asked to download an update, then you are walked through some initial setup. The process is pretty simple and all seems to work rather magically. One of the things that you are shown is how to interact with the Dashboard and other menus. You are now allowed to go into a “Kinect” mode and browse some Kinect specific menus and applications. I’m assuming this will grow, but the new ESPN experience is here as well as last.fm and some other goodies like Kinect video.

One of the first things I noticed when using Kinect is that it doesn’t require a whole lot of distance between you and the device, which I was worried about since I live in a condo and space is rather limited. The other thing was just how smooth the transitions are between it recognizing you and you walking away. It mostly feels natural and doesn’t get in your way or annoy you at all. It’s not like you need to hold down a button and say “I’m here”, you basically just walk in the view and wave and you’re up and running. 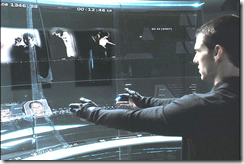 I will say at the point that I was moving through the dashboard I felt a bit like Tom Cruise in Minority Report.image As a developer my mind was already off dreaming of how a nice .NET SDK around this thing would change a lot in application interfaces. I now feel a bit disappointed by everything on my TV that I can’t control with simple gestures. Microsoft needs to keep pushing this and compete with Apple and Google in the TV software interface battle. If they allowed this as a way to change the channel and volume, I’m sold… 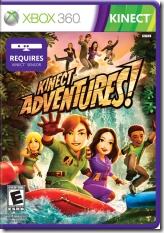 Kinect Adventures is the “Wii Sports” of the Kinect, but I will say Wii Sports looks like child's play compared to this. First off the game play is fast and fun and it gets you started with no real up front coaching. Before you know it you’ll be sweating and giggling like a little girl. It actually took me a while to realize that I could actually use my feet and not just my hands to do a lot of the maneuvers. This game is definitely worth your investment and a great intro to the franchise. 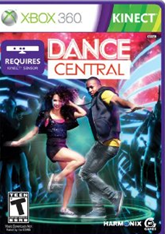 Dance Central was the other game that I purchased, on my wife’s request. This was good but definitely a couple of notches down from Adventures. First off, it’s really a 1 player game because the 2 player modes force you to take turns. This is almost enough reason for me to give this a no vote, but once you get into it its still pretty fun. You aren’t going to become Usher any time soon, but you may pick up some moves worth busting out at a friend’s wedding. Overall the experience isn’t as good, but I got to think any game with Kinect is still so novel and fun right now that it won’t really matter.

I was initially worried that there was going to be a gotcha with the system and what it could detect or that the games would be lame, but I will say right now that it is pretty magical. Take what you felt the first time you played Wii and then multiply that times 5. It just feels natural and the interface is very graceful and just detects when you come and go and doesn’ make a stink or hiccup during the transitions.

The only negative complaint I have was that through my entire experience I think I had to download 8 different updates. One for each game, one for the Kinect, and one for each application you wanted to interact with like the ESPN experience. I just wish this would just happen and not ask me each time, I mean what am I gonna do, not update?